I was in NYC a few weeks ago, and went to The Horticulture Society of New York, which is a gorgeous space full of sun and plants (believe it or not). I went to see an art exhibit called Leur Existence (The Tree Project). 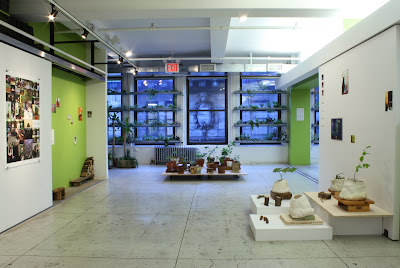 The trees that still live from the time of the atomic bombing in Hiroshima are called, Hibaku trees (A-bombed trees).

In the winter of 2008, from a tree Dr. Riki Horiguchi in Hiroshima, I received seeds of Round Leaf Holly, Persimmon, Chinaberry, Firmiana simplex, Japanese Hackberry, Jujube trees that are the second or third generation of Hibaku Trees.

I have been giving these seeds to the ones that are interested in planting them both in the US and the world. By sharing these seeds, I would like to share the pleasure of growing plants, especially the plants from Hibaku seeds.

After the bombing of Hiroshima, it was believed that nothing would grow there again for years. Two months later, some trees began to bud. The Tree Project spreads those seeds across the globe as a statement on Nature's resilience and hope in the face of destruction.

I brought back three packets of seeds, which are currently in status in my fridge. As I completely fail to grow anything, I would like to give one packet to Jigsaw and one to an interested individual. The final is for a friend. The only stipulation is that you document it for The Leur Existance, and if you would like to mind the one at Jigsaw, to cross-post to Jigsaw's website. Please be in touch with me at willow@jigsawrenaissance.org